Activist against fossil fuels is ironically killed by an American SUV…

A man who was hiking across America barefoot on the side of highways to ‘save the earth’ was struck by a Buick SUV and died Saturday.

Mark Baumer, 33, began his shoeless trek in October. His journey aimed to raise awareness and funds for the FANG Collective, a Rhode Island organization that supports nonviolent resistance to the natural gas industry.

Florida Highway Patrol confirmed Baumer was hit on the side of Highway 90 in Walton County. He was pronounced dead on the scene during the 101st day of his trip.

The vegan, climate advocate was a web content specialist at a library in Providence, Rhode Island.

He told Vice that going barefoot made his feet hurt and it was more comfortable to walk on the white line grazing the edge of the road because it is the smoothest.

He told the website that people gave him strange looks for walking barefoot in such a dangerous location. 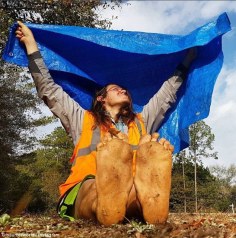 He also said he would not move for cars but would heed to trucks because: ‘They’ll really mess you up.’