Six people have been killed by a truck driver who mowed them down on a bike path in lower Manhattan on Tuesday.

The driver made his way from Houston Street down towards Tribeca where he mounted the bike path on the West Side Highway shortly after 3pm. 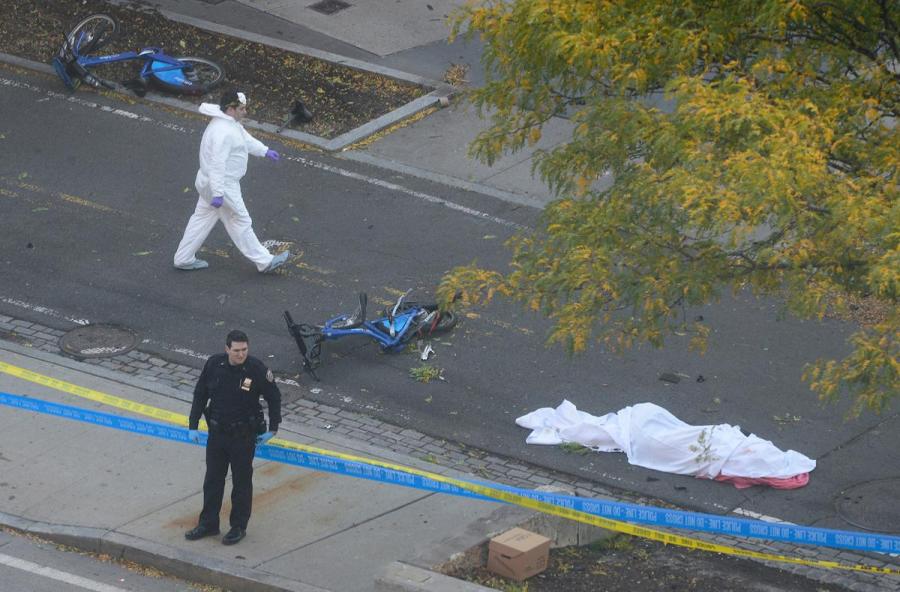 After striking several cyclists and runners, he came to a stop when his truck crashed into a school bus beneath the Tribeca bridge.

The man then emerged with a gun in his hand and was shot in the leg by police, senior police sources told CNN.

He survived and was taken to hospital but at least six innocent people were killed and others are injured.

At least one officer has been shot and is expected to make a recovery. The details of other injuries are not known.

Others ran for their lives as they watched the truck plow into pedestrians after veering off the road.

isis called for attacks on Halloween

Six people have been killed by a truck driver who mowed them down on a bike path in lower Manhattan on Tuesday shouting ‘allahu akbar.’

The driver made his way from down towards Tribeca on the West Side Highway and mounted the bike path a few blocks north of Chambers Street shortly before 3pm.

After striking several cyclists and runners, he came to a stop when his truck crashed into a school bus beneath the Tribeca bridge. 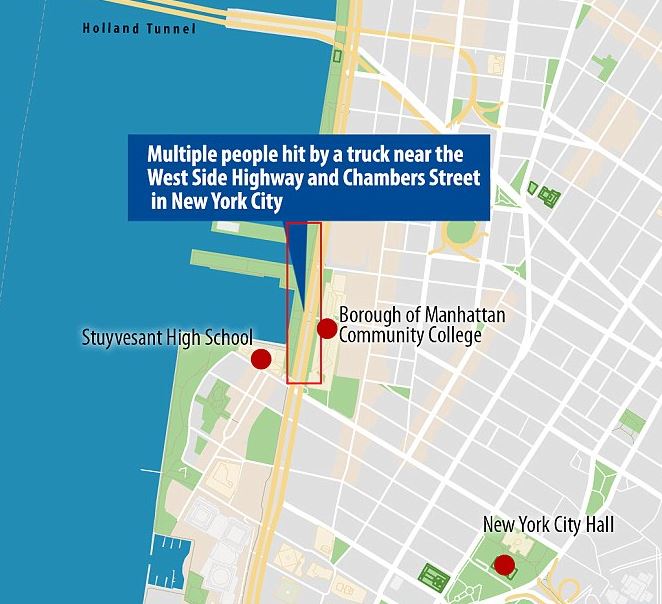 The man then emerged with imitation guns in his hand and was shot in the leg by police. He survived and was taken to hospital but at least six innocent people were killed and others are injured.

The FBI and NYPD are now treating the incident as an act of terror.

At least six people were killed and 11 were injured when a truck driver deliberately mowed down people and targeted a school bus in lower Manhattan Tuesday in what authorities are investigating as an act of terror, officials tell News 4 New York.

More than a dozen people were hit when the driver of a Home Depot rental truck zoomed at least 10 blocks down a popular bike bath from West Houston to Chambers streets.

The man crashed into a school bus carrying three children during the rampage, and police say that he’d deliberately targeted that bus. Witnesses told police they saw the driver swerve the truck to target the school bus.

They said the driver screamed “Allah’ akbar” in the truck, then emerged carrying two fake guns — either BB or paint guns — and started running around before he was finally shot by police.

“A guy got out with his biker jacket and started shooting up the place,” one witness told News 4. “All the kids were in the courtyard at P.S. 89 and started running.”

The conditions of the children and the school bus driver weren’t immediately clear. The driver was taken to Bellevue Hospital after he was shot by police.

A U.S. counterterrorism official told NBC News that the intelligence community is unaware of any claims of responsibility in the attack at this time.

Sources initially said they were responding to a report of at least five people shot near West and Chambers streets in Tribeca, but officials say their investigation now shows the injuries came from the truck crash.

Students from Stuyvesant High School and other witnesses in the area tweeted that they’d heard gunshots. A message has been left with the Department of Education.

A large number of police vehicles could be seen near West Street and Chambers Street in Tribeca, which is near a community college, Stuyvesant High School, and a few blocks north of the National Sept. 11 Memorial.

According to audio recorded by the service Broadcastify, the NYPD cleared the area around the truck to bring in bomb squads shortly after the violent episode.

“Box truck on Chambers and West, we need that area cleared,” said one officer. “We need everybody away from that truck.”

Both Mayor de Blasio and Gov. Cuomo were headed to the scene. President Donald Trump’s office said in a statement that he and Chief of Staff John Kelly are monitoring the situation.

A man in a pickup truck killed eight people when he drove onto the West Side bike path in lower Manhattan Tuesday afternoon — and then shouted “Allahu Akbar” as he got out of the car with fake guns, police sources said.

The suspected terror attack happened around 3:15 p.m., when a man in a flatbed pickup truck from Home Depot veered onto the bike path at West St., a few blocks north of Chambers St., police said.

The suspect, who was shot by police, then plowed his car into up to 23 people on the path, killing eight and injuring more than a dozen others, according to cops.

He continued driving south and hit another car, then got out and displayed “imitation firearms,” police said.

The man then shouted, “Allahu Akbar,” according to police sources.

Witnesses described a scene of terror, as people fled for safety.