You know that warm feeling that spreads across your body when you experience “multiculturalism?”

A recent surge in stabbings and knife-related violence across Germany is drawing renewed attention to the deteriorating security situation there since Chancellor Angela Merkel’s 2015 decision to allow in more than a million migrants from Africa, Asia and the Middle East.

In recent months, people armed with knives, axes and machetes have brought devastation to all of Germany’s 16 federal states. Knives have been used not only not only to carry out jihadist attacks, but also to commit homicides, robberies, home invasions, sexual assaults, honor killings and many other types of violent crime.

Police admit they are outnumbered and overwhelmed and increasingly unable to maintain public order — both day and night.

Statistics that are reliable on knife violence in Germany — where police been accused of failing to report many crimes, apparently in an effort “not to unsettle” the public — do not exist.

A search of German police blotters, however, indicates that 2017 is on track to become a record year for stabbings and knife crimes: Police reported more than 3,500 knife-related crimes between January and October 2017, compared to around 4,000 reported crimes during all of 2016 — and only 300 in 2007.

Overall, during the past ten years, knife-related crimes in Germany have increased by more than 1,200%.

The media in Germany do not report most knife-related violence. 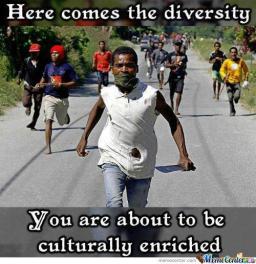 Crimes that are reported are often dismissed as “isolated incidents,” unrelated to mass immigration. Moreover, many crime reports, including those in police blotters, omit any reference at all to the nationalities of the perpetrators and victims — ostensibly to avoid inflaming anti-immigration sentiments.

The epicenter of knife-related violence in Germany is Berlin, where some areas are now so dangerous that they have effectively become no-go zones. In Neukölln and other neighborhoods with large immigrant communities, stabbings have become daily features of life. Migrants were responsible for at least 45% of the crimes committed in the German capital in 2016, according to the Berliner Morgenpost.

The northern cities of Bremen and Bremerhaven are also hotbeds of knife violence. In 2016, at least 469 people — more than one a day — were stabbed in Bremen, according to official documents obtained by the newspaper Bild. More than a dozen people in Bremen died of their stab wounds. Another 165 knife attacks were registered in nearby Bremerhaven, a 75% increase since 2014. Migrants, according to Bild, were found responsible for most of the violence.

Another flashpoint of knife violence is North Rhine-Westphalia; stabbings are rampant in Bielefeld, Bochum, Bonn, Cologne, Dortmund, Düsseldorf and Essen, among other cities. Düsseldorf’s city center has been particularly plagued by stabbings.

In mass brawls between groups of people from different nationalities and ethnic groups, knives appear to be weapons of choice:

When They’re Not Raping, Stabbing, Shooting, or Running Over Their Gracious Hosts the Poor, Poor “Refugees” Like to Attack Churches and Destroy Property…

In a rare candid moment, German media reported at least 200 cases of damaged churches in the region of Bavaria alone every year.

In addition, attacks on summit crosses are also increasing in the region’s mountains. Crosses on several mountain tops have been toppled and destroyed with axes or saws.

There’s a growing anger among the indigenous German population over the attacks. Some people think Islamists are behind it.

There have been reports of desecration from Pentecost, Längental and from the “Prinzkopf” which lies between Sylvensteinstausee and Tyrol.

Some repairs of historic churches can cost tens of thousands of euros. It’s an attack on people’s faith and communities suspect there is a religious motive behind it, e.g. Muslim migrants might be trying to sow fear in the population.

One thought on “Germany Experiences the Joy of Islam: Stabbings Up 1200%; 200 Christian Churches and Sites Attacked and Damaged In Bavaria…”