The much heralded “March for Our Lives” was no more than an exhibition of the liberal Democrat’s tactics in action. After years of brainwashing children to hate the United States and their parents while singing creepy hymns to Obama, refusing to remove thugs and criminals from school systems, and pumping kids full of mind and mood altering drugs Democrats have a portion of these kids under their control.

Listen to the left’s new eloquent and brilliant spokesman:

Wow, there’s a lot of hatred for parents and any Conservative in this video…almost like Mr. Hogg was programmed with an agenda.

I believe they really thought Mrs. Clinton would successfully steal the election, and this sort of disgusting, immature, and treasonous protests would be excuse enough for her to “take action.” However, Americans stood up and voted for Mr. Trump in high enough numbers to overcome the left’s fake news, fake polls, and fake votes. The liberals decided to continue with their plans anyway, hoping to pressure Americans into giving up their rights and to try and build momentum for the next election.

That brings us the the “march.”

These two have been given coaching, direction, and 24 hour adoration by the fake news leftist “media” in an attempt to threaten and shame Americans into stupidly allowing our rights to be forever taken away.

Look at the optics of this march. 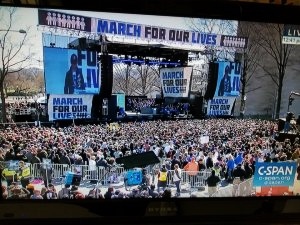 Do you really think Mr. Hogg set this up?

There’s huge Soros and “progressive” money bankrolling this spectacle. It’s not the work of some kids grieving for their friends.

Barely two weeks ago, the student survivors sat in a circle in the living room of one of their parents’ homes, planning a trip to Tallahassee to meet with lawmakers and handling nitty-gritty matters like which media outlets to talk to.

Since then, major players and organizations — including Everytown, Giffords, Move On, Planned Parenthood, and the Women’s March LA — told BuzzFeed News they are helping the students with logistics, strategy, and planning for next month’s March for Our Lives rally and beyond. Much of the specific resources the groups are providing to the Parkland students remains unclear — as is the full list of supporting organizations — but there are broad outlines.

MoveOn said it will encourage its millions of members to follow and promote the March for Our Lives movement on social media and attend the rally next month. The group said it had offered support in organizing logistics such as security and portable toilets, but it is unclear if the students have taken them up on their offer.

A spokesperson for Planned Parenthood said the group is “teaching and hosting trainings” for young activists across the US “to keep momentum going so they don’t get burned out.”

Planned Parenthood said it has been in contact with Giffords, which is spearheading the national coalition of groups working with March for Our Lives.

Don’t even think about giving in.

This isn’t about children, school safety, or any other drivel spewing out of these kid’s mouths.

This drama is designed to usher in the downfall of the United States and the enslavement of its citizens.

It’s hopefully the last thrashing of the left in the throes of death.

Ignore it when you can, argue it down when you must…and VOTE! Make sure everyone in your family and circle of friends VOTES! (Unless, GOD forbid they are liberals…leave them out of the loop)

Contact your representatives and demand that they adhere to our Constitution.

No no “gun control” laws at all, ever.

4 thoughts on “The “March for Our Lives” Was Hogg-Wash…”