We told you she’s a witch long ago, now it’s official:

Earlier this month, Hillary Clinton made an appearance in New York City at an exclusive women’s club called The Wing. The event was put together by co-founders Audrey Gelman and Lauren Kassan in honor of Hillary. They were able to converse on her new book What Happened, her legacy, and (unsurprisingly) Russian meddling. It was quite the typical post-election conversation to be expected from Hillary.

However, on this occasion, there was one significant difference. This time Hillary was speaking to a group of women who practice witchcraft and openly call themselves a coven.

According to The Wing’s Instagram page: “We’re a coven, not a sorority.”

During the event, Hillary was awarded an honorary lifetime Wing membership and was welcomed by the interviewers as the “newest member of our coven” in front of a room filled with cheering members.

For decades it has been rumored that Hillary Clinton practiced witchcraft and was involved with various covens throughout the years. Most famously, former Clinton employee Larry Nichols described numerous times in which Hillary would practice witchcraft with a Californian-based coven one week and the next she would be going to church as if nothing happened. Up until Hillary lost the election, there was thought to be a concerted effort to hide her visits to these covens. Yet, she seems to be joining self-proclaimed covens right in the open and the media. Once again, has little to say on the matter.

The Wing is fairly open about their organization being a coven, although still somewhat subtle. Often times they are simply referred to as an “Exclusive, Members-Only Feminist Club.” However, there are clear undertones suggesting all the members are practicing witches. 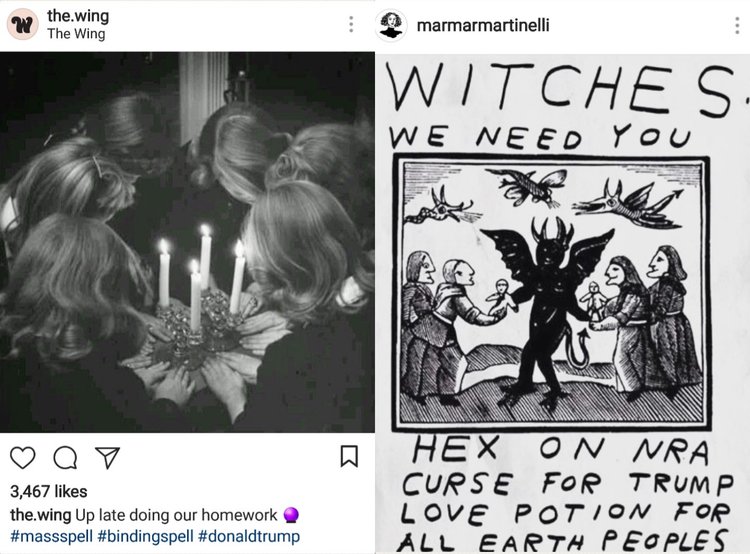 On their website, The-wing.com, you can see their online store is full of witchcraft apparel including a T-shirt labeled “Wing Coven Member” with an Inverted Pentagram symbol in the middle. The Inverted Pentagram is used frequently during the casting of hexes and spells onto other people.

Another example is their Wing Beanie displaying the phrase “Wing Spells” with a triangle located above it and is surrounded by the words “Ghouls, Chants, Incantation.” Wing Spells refers to a common spell used in witchcraft to give the practitioner the feeling of having wings. The website uses the Latin expression “Alis Grave Nil” which translates to “Nothing is Heavy to Those Who Have Wings.” This seems to be another incantation used for their fixation with Wing Spells.

The organization has attracted many well-known names throughout the years, Jennifer Lawrence and Senator Kristin Gillibrand recently had events with The Wing and Senator Feinstein is due to have one soon as well. One of the founding members of the coven was Lena Dunham, who was a childhood friend to co-founder Audrey Gelman. Lena Dunham has been on the receiving end of ongoing backlash on many controversial subjects including allegedly sexually assaulting her sister at a young age, according to her memoir. Gelman also has strong ties with another perverted character: disgraced photographer Terry Richardson. Gelman dated Richardson for years despite continuous allegations of pedophilia and sexual assault. 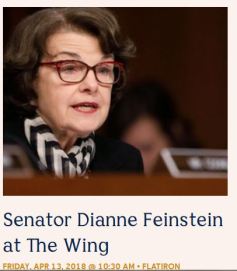 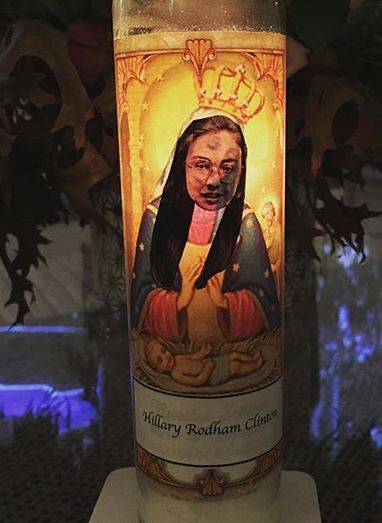 Perhaps the strangest of all can be found on their social media pages. The co-founders and other employees depict pictures of the women dressed up as witches, pentagram symbology and references to the Hindu god Shiva. One post by The Wing’s Director shows a demonic figure surrounded by witches that reads: “Witches we need you, Hex on NRA, Curse for Trump.” A separate post has a picture of several women surrounding lit candles with a caption mentioning a mass, binding spell also placed on Donald Trump.

With their elite ties and growing notoriety, The Wing has become an internationally recognized organization which has plans for more growth throughout the country and with new covens opening in London and Toronto. Although it is difficult to find copious amounts of information on this tightly-knit group, one thing is for certain: Hillary has officially become a member of an elite Black Witch Coven that enjoys casting spells on President Trump and, after years of speculation, she did so right in front of the public eye.

Hillary did this on April 3rd…