As we reported yesterday, Facebook has taken it on itself to simply erase years of work, and make millions of followers disappear.

Mainly, it was conservative Americans that were targeted, and treasonous left-wing sites full of lies, pornography, and Democrat terrorist groups like Anti-Fa, and Black Lives Matter, were left to spew their filth, deception, and vile hatred.

We told you it might cost some people their jobs, and it has, I personally know of some who are unemployed as of today…

Conservatives are being hammered by the iron fist of fascism reborn, and free speech in America is perishing under the death blows.

Yesterday, as I was working, editing factual articles for Conservative Daily Post, I was sent a notification from mega-social media platform Facebook that my personal account was ‘disabled.’

Within minutes, all members of the administrative team were also notified, and all of our personal and business Facebook pages were removed.

We found out later that the ‘purge’ was announced to left-leaning outlets Washington Post, and New York Times.

Despite the claim, we have never created pages using fake names. We’d NEVER used ‘spam’ behavior either, but simply posted legitimate news stories from Conservative Daily Post on Facebook pages that were accurately, and legally made.

It seems patently obvious to me, and others, that the purge was designed to control the flow of free information before the November election.

Now, the reason Facebook claims the so-called ‘political spam’ purge occurred was that “largely domestic actors using click-bait headlines and other spam tactics to drive users to websites where they could target them with ads. The company said it was not taking issue with the nature of the content posted by the pages, but with the behaviors of the accounts, which used inappropriate tactics to artificially inflate their influence. Some of the pages and accounts had millions of followers.”

Only part of this is true. By our last count, Conservative Daily Post managed pages with a rough total of two million followers.

Facebook added that these people, “consistently broken our rules against spam and coordinated inauthentic behavior,” and that “People will only share on Facebook if they feel safe and trust the connections they make here.”

This is the same argument used by Joseph Goebbels.

“To be a socialist is to submit the I to the thou; socialism is sacrificing the individual to the whole.”

“Propaganda should be popular, not intellectually pleasing. It is not the task of propaganda to discover intellectual truths.”

Likewise, “Censorship ensured that Germans could only see what the Nazi hierarchy wanted people to see, hear what they wanted them to hear and read only what the Nazis deemed acceptable. The Nazi police dealt with anyone who went outside of these boundaries.”

“The chief function of propaganda is to convince the masses, who slowness of understanding needs to be given time in order that they may absorb information; and only constant repetition will finally succeed in imprinting an idea on their mind………the slogan must of course be illustrated in many ways and from several angles, but in the end one must always return to the assertion of the same formula. The one will be rewarded by the surprising and almost incredible results that such a personal policy secures.”–Adolf Hitler from “Mein Kampf”

Of course, there are plenty more examples of the similar socialist bent Facebook is currently demonstrating. But, basically, their idea is to control the thoughts of the masses, so the ‘community’ is safe and free from disturbing truths. 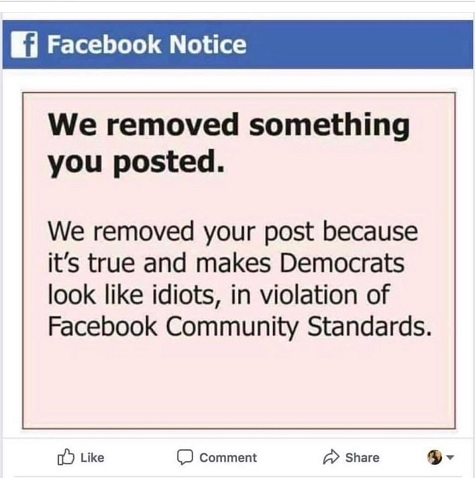 Personally, I WANT to read disturbing truths if they involve the vile and illegal actions of the leaders of our country.

I WANT to the opportunity to seek out facts, not relying on a few elitists to spoon feed me what they want me to know like some intellectual vegetable.

I am not some blithering idiot who can’t think for herself, or find information in REAL BOOKS. So, apparently according to Facebook, people like me must be silenced by a platform that can’t defend their stance using logic.

They can only use brutality.

Facebook gave Gizmodo a few of the sites, including “The Resistance, Reasonable People Unite, Reverb Press, Nation in Distress, Snowflakes.”

It responded this morning:

There is a hit piece on me in the New York Times today, which as a conservative I take as a point of honor.

Just to note some of the inaccuracies in the piece:

The conservative site, run by the blogger John Hawkins, had created a series of new Facebook pages and accounts over the last year under many different names, according to Facebook.”

Facebook has removed “559 Pages and 251 accounts” in the US “that have consistently broken our rules against spam and coordinated inauthentic behavior.” They include:

Facebook takes down Reverb Press, and Reasonable People Unite, shutting down pages left and right. Only the corporatist “mainstream” is safe.

NEW: “I would gladly abide by Facebook’s terms if I understood what they were,” said Chris Metcalf, the publisher of the left-leaning “Reasonable People Unite” which was shut down along with eight additional Facebook pages. w/ @lizzadwoskin https://t.co/W01C3AvI4N

And, these are just a few. Conservative Daily Post’s removed pages include:

Incidentally, we were also ‘allowed’ to download our information… like pictures of our families, etc., but when the files were opened, no information ‘text’ files were listed for all followers, following, messages, likes, comments, groups, and friends.

Because my personal account was listed as an administrator for the pages, it was also shut down, and I now have no way to retrieve that information.

Because I wanted to retrieve it, I idiotically followed the appeal process, which required an ID. So, now Facebook probably has a nice little list to send their leftist masters.

Make no mistake, this isn’t a private business doing what it wants… this is totalitarian control of free information.

This is what liberals do.

They have shown, time and time again, that if you do not subscribe to their way of thinking, according to them, you do not have the right to live, eat, or work in peace.

They are ramping up these fascist attacks because they know they are losing the intellectual thought war.

That’s why I’m asking for your help.

If you recognize that people have the right to read what they want… and can decide for themselves what is factual, please help us by following our website by email. We do not send spam.

Facebook cannot be allowed to become the modern day Joseph Goebbels. Please contact the Senate committee currently dealing with the monopolized control of social media at 202-224-1700, and send a message to our Commander in Chief, Donald Trump at the White House contact page.

The only way we can preserve our republic and prevent complete media mastery is to initiate the destruction of these social media giants, who profit from their stranglehold on free information.

Because if they do this today and nothing happens, the purge tomorrow will be even bigger, and bigger, until we all become slaves to the state.

2 thoughts on “Facebook Tries to Destroy Conservatives, And it’s Costing Some Good People Their Jobs…”