First, a small victory for Americans:

On Friday, Florida Judge Carol-Lisa Phillips ruled in favor of Florida Governor Rick Scott, who was ahead in votes in his race for the Senate seat held by incumbent Democratic Senator Bill Nelson when the polls closed Tuesday night, and had filed suit along with the National Republican Senatorial Committee against Broward County election supervisor Brenda Snipes in order to force her to release public records surrounding the votes in Broward County. The lawsuit stated that Snipes was “unwilling to disclose records revealing how many electors voted, how many ballots have been canvassed, and how many ballots remain to be canvassed.”

The judge found that Snipes, the Broward Supervisor of Elections, violated public records act and the Florida constitution, and must provide public records requested by Scott and NRSC.

Snipes must hand over the voting records by 7 p.m. EST on Friday.

On Thursday, Scott spoke to reporters, and he pointed out what was going on:

Late Tuesday night, our win was projected to be around 57,000 votes. By Wednesday morning, that lead dropped to 38,000. By Wednesday evening, it was around 30,000. This morning, it was around 21,000. Now, it is 15,000. On election night, Broward County said there were 634,000 votes cast. At 1 a.m. today, there were 695,700 ballots cast on election day. At 2:30 p.m. today, the number was up to 707,223 ballots cast on Election Day. And we just learned, that the number has increased to 712,840 ballots cast on Election Day. In Palm Beach County, there are 15,000 new votes found since election night. So, it has been over 48 hours since the polls closed and Broward and Palm Beach Counties are still finding and counting ballots – and the Supervisors – Brenda Snipes and Susan Bucher – cannot seem to say how many ballots still exist or where these ballots came from, or where they have been.

Second, who is “Brenda Snipes?” (Pictured in our feature photo)

The Florida official put in charge of counting votes in Broward County — the most liberal county in the state — for the gubernatorial and Senate race was previously accused of having more voters on her rolls than eligible voters in the county.

Despite the election occurring days ago, Broward County Board of Elections Supervisor Brenda Snipes continues tallying ballots, though she has refused to disclose how many ballots are still not counted. Republican Senate candidate Rick Scott has announced he will sue the county for mishandling the election.

In 2016, Snipes had a lawsuit filed against her office by the American Civil Rights Union after they claimed she had more voters on the rolls in the county than eligible citizens in the area at one point.

According to the lawsuit, filed by the Public Interest Legal Foundation, Broward County had more voters on their voter rolls than eligible citizens with a 103 percent voter registration rate.

The lawsuit also accused Broward County of having nearly 50 registered voters on the rolls who were older than the oldest living American at the time. One of those voters was allegedly listed as being 130-years-old.

Another 1,200 voters allegedly remained on the Broward County rolls despite using ineligible commercial addresses and about 23 percent of the voters who died in 2011 were allegedly still on the county voter rolls in May 2012, the lawsuit stated.

Third, besides the voting dead, voting 130-year-olds, etc….What else do we know about this Democrat hack?

Three statewide races in Florida are headed to a recount and all depend on results from a county whose supervisor of electionshas a history of losing ballots and breaking laws by allowing illegal immigrants and felons to vote, as well as illegally destroying ballots.

This should alarm anyone hoping for fair and accurate election returns, as Snipes’ history in Broward is checkered with numerous examples of facilitating illegal voting practices.

In 2017, Dr. Snipes admitted in court that her office had allowed non-citizens and felons to vote and was particularly vulnerable ahead of major elections.

In 2012, a Broward elections official complained about Snipes tendency to “find” additional ballots in close elections. Ilene Lieberman, a Broward County Commissioner and Canvassing board member, told the Miami CBS affiliate in 2012, “When the canvassing board recessed on Saturday we were basically told there were between 150 and 165 ballots remained to be counted, that they had to double check, that they hadn’t been counted before. And when we came back on Monday the report showed 963 new ballots.”

Snipes also presided over a “phantom voting district” of 2000 voters who were using illegal addresses, many of them at a UPS Store, claimed as their places of residence.

Republican Party officials sued Snipes’ office in 2016 over the illegal counting of 180,000 mail in ballots, she admitted that she didn’t know the meaning of the word “canvassing.” Snipes’ office had been opening ballots illegally, without the legally required participation of other members of the canvasing board.

But Snipes hasn’t just been accused of malfeasance from Republicans.

A 2016 Democratic Congressional candidate, Tim Canova, challenged the results of his loss to Debbie Wasserman-Schultz in court, only to have Snipes’ office  illegally destroy the ballots, preventing additional inspection.

Snipes and her mob are breaking Florida law, right now. And that’s not all of the shady Democrat happenings in Florida: 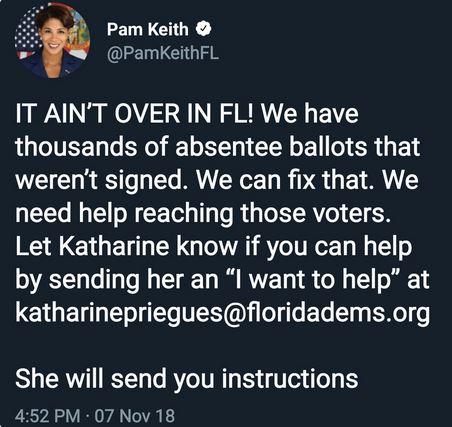 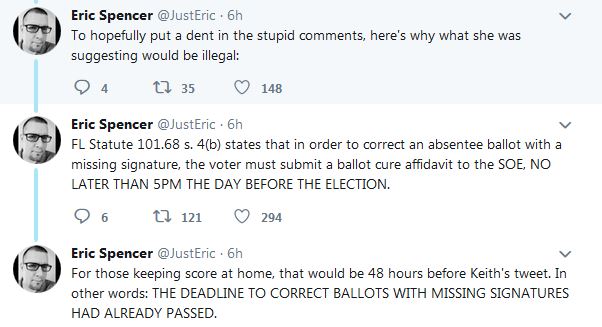 16 thoughts on “Florida Disgrace: Democrats Seem to be Trying to Undo the Will of the People, Again…”