A local news outlet decided to look at the issue of tax fraud by illegal criminal aliens using ITINs. Understand that this report is just for ONE area, and imagine the levels of theft going on nationally…

INDIANAPOLIS – Inside his central Indiana office, a longtime tax consultant sits at his desk, shaking his head in disbelief.

“There is not a doubt in my mind there’s huge fraud taking place here,” he said, slowly flipping through the pages of a tax return.

He came to 13 Investigates to blow the whistle.

The Internal Revenue Service says everyone who is employed in the United States – even those who are working here illegally – must report income and pay taxes. Of course, undocumented workers are not supposed to have a social security number. So for them to pay taxes, the IRS created what’s called an ITIN, an individual taxpayer identification number. A 9-digit ITIN number issued by the IRS provides both resident and nonresident aliens with a unique identification number that allows them to file tax returns.

While that may have seemed like a good idea, it’s now backfiring in a big way.

Each spring, at tax preparation offices all across the nation, many illegal immigrants are now eagerly filing tax returns to take advantage of a tax loophole, using their ITIN numbers to get huge refunds from the IRS.

The loophole is called the Additional Child Tax Credit. It’s a fully-refundable credit of up to $1000 per child, and it’s meant to help working families who have children living at home.

But 13 Investigates has found many undocumented workers are claiming the tax credit for kids who live in Mexico – lots of kids in Mexico.

“We’ve seen sometimes 10 or 12 dependents, most times nieces and nephews, on these tax forms,” the whistleblower told Eyewitness News. “The more you put on there, the more you get back.”

The whistleblower has thousands of examples, and he brought some of them to 13 Investigates. While identifying information such as names and addresses on the tax returns was redacted, it was still clear that the tax filers had received large tax refunds after claiming additional child tax credits for many dependents.

“Here’s a return right here: we’ve got a $10,3000 refund for nine nieces and nephews,” he said, pointing to the words “niece” and “nephew” listed on the tax forms nine separate times.

“We’re getting an $11,000 refund on this tax return. There’s seven nieces and nephews,” he said, pointing to another set of documents. “I can bring out stacks and stacks. It’s just so easy it’s ridiculous.”

WTHR spoke to several undocumented workers who confirmed it is easy.

They all agreed to talk with WTHR investigative reporter Bob Segall and a translator as long as WTHR agreed not to reveal their identity.

One of the workers, who was interviewed at his home in southern Indiana, admitted his address was used this year to file tax returns by four other undocumented workers who don’t even live there. Those four workers claimed 20 children live inside the one residence and, as a result, the IRS sent the illegal immigrants tax refunds totaling $29,608.

13 Investigates saw only one little girl who lives at that address (a small mobile home). We wondered about the 20 kids claimed as tax deductions?

“They don’t live here,” said the undocumented worker. “The other kids are in their country of origin, which is Mexico.”

He later explained none of the 20 children have ever visited the United States – let alone lived here.

So why should undocumented workers receive tax credits for children living in a foreign country, which is a violation of IRS tax rules?

“If the opportunity is there and they can give it to me, why not take advantage of it?” the worker said.

Other undocumented workers in Indiana told 13 Investigates the same thing. Their families are collecting tax refunds for children who do not live in this country. Several of the workers told WTHR they were told it was legal for them to claim the tax credit for a child who does not live in the United States.

“The magnitude of the problem has grown exponentially,” said Russell George, the United States Department of Treasury’s Inspector General for Tax Administration (TIGTA).

And he says the IRS has known about the problem for years.

What George finds even more troubling is the IRS has not taken action despite multiple warnings from the inspector general.

“Millions of people are seeking this tax credit who, we believe, are not entitled to it,” said the inspector general. “We have made recommendations to [IRS] as to how they could address this, and they have not taken sufficient action in our view to solve the problem.”

Other information obtained from the TIGTA audits include:

· Claims for additional child tax credits by ITIN filers have skyrocketed during the past decade, from $161 million in 2001 to $4.2 billion in tax year 2010.

· In 2010, the IRS owed undocumented workers more in claimed additional child tax credits than it collected from those workers in taxes. 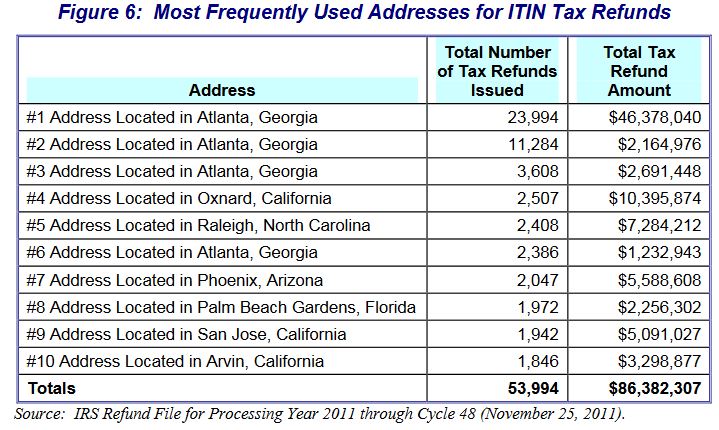